What Happens if a Dog Bites You in Ontario

Fourteen years ago pit bulls were banned from the province of Ontario due to the increased number of reported dog bites by the breed. The law was passed with the intention of permanently removing pit bulls, or at the very least prevent bringing in new pit bulls. The 2005 law went so far as to include three breeds with similar appearances in the ban. American  Staffordshire Terriers, Staffordshire Bull Terriers, and American Pit Bull Terriers would also need to be muzzled, on a leash and kept from breeding. This satisfied most Ontario citizens and reduced the number of pit bulls by two-thirds over the last 14 years. The remaining pit bulls are now elderly and no longer a threat, however, the law remains intact based on public fears against the breed.

Beware: Dog Bites are on the Rise

The law did help reduce pit bull bites substantially and at this point, the pit bull population in Ontario is expected to be non-existent by the year 2020. Yet, contrary to what was expected – the incidence of dog bites has been on the rise over the past few years.

In 2016, there were over 500,000 dog bites in the country and three-quarters of the victims were children 10 years and under. Many view dog attacks as a public health epidemic and feel these attacks should be handled with the same treatment as coyotes, cougars, and bears that wander into the city.

There is no clear answer as to why dog bites continue to be on the rise, but many contend that dog owners do not train their pets. So there are public-health measures that have come forth to educate pet owners as to their liability and responsibilities in terms of dog ownership. That includes licensing, leash and muzzling laws, and holding owners responsible for failings. 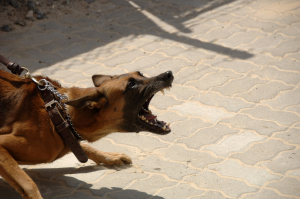 Ontario follows a strict liability rule when it comes to dog bite cases.  And although it seems like It should be a relatively uncomplicated situation to deal with, there are always alternate viewpoints and conclusions.

Even though the dog owner is automatically viewed as responsible after a dog-bite, the victim will still have to prove they were attacked. The courts will still attempt to discern whether the dog was provoked and the possibility that the victim was partially responsible for the attack. The area of law that pertains to dog bite attacks in Ontario is referred to as The Dog Owners Liability Act. Here are the most important parts:

So the bottom line is whether or not the owner was aware of the animal’s propensity to bite, the owner remains liable for any damages caused to the victim. However, the liability may be reduced or eliminated based on the extent of the victim’s involvement.

Obviously, if the victim was bitten while attempting to carry out a criminal act or trespass on the property, the owner is not held liable.

What to do After a Dog Bite

If you or someone you know has been recently bitten by a dog you will want to follow these steps. Being bitten is traumatic enough without having to fight in court for appropriate compensation.

Step 2:  Report the incident. Call your local police and although they may need to refer you to another organization, it’s a good place to start. Or if you’re in Toronto call Toronto Animal Services at 416-338-7297.

Step 3:  Gather information on the dog owner including the name, address, phone number, and the insurance company’s information.

Step 4: Evidence collection – Take photographs of your injuries, proof of the dog’s ownership,  and any statements from witnesses who saw the incident.

Step 5: Contact a legal professional who can help ensure that you follow the correct steps in order to receive appropriate compensation.

Wynperle Law specializes in personal injury cases and provides free legal consultations for anyone who has experienced a recent dog bite or attack. Once you have completed the first four steps after the incident then contact us immediately. We will discuss your rights and possible next steps to recover any expenses and receive maximum compensation for your injuries.