What to Do if You Suspect Nursing Home Abuse

Have you heard this story reported by CBC News? It’s enough to get your blood boiling.

Diana Pepin had installed a camera in her mother’s room in an Ottawa long-term care home. As a former nurse, she wanted to monitor the way her mother – Viola (86) – was being treated by the staff. She had a hunch that something wasn’t right when she noticed her mother’s hygiene was lacking. However, what she witnessed on video was not what she had been expecting. In fact, it was more shocking. Viola’s personal support work that had been caring for her for years was caught on tape saying, “Die, die, you bitch. You’ve got to die now.”

One can only imagine the toll this took on her mother. Fear of going to sleep at night, or being given wrong medications led to depression. Luckily Ms. Pepin followed her suspicion and was able to put an end to a sickening situation.

According to several sources, this case is one of many. Statistics Canada sights that nearly 25 percent of the country will be 65 or older by 2031 – which is around eight million people. The reported elder abuse cases have nearly doubled in the past 10 years. So with a larger onslaught of people entering the elder stage, that is serious cause for concern.

The aging process can leave our older loved ones quite vulnerable and the problem with “fixing it” is that the majority of these incidents are not reported. There are several types of abuse being reported including physical, neglect, psychological, emotional, sexual and financial. Additionally, there are issues with staff members withholding or providing too much medication as well as denying patients their religious beliefs and practices.

The following list includes the most common forms of elder abuse in nursing homes. Do any of these scenarios sound familiar?

This is possibly one of the most common forms of elder abuse and happens when someone finds a way to obtain financial gain from the elder without consent.  Financial abuse comes in the form of theft, forgery, or pressuring someone to give up account information, checks or even cash. This type of abuse is more difficult to spot if you aren’t involved in the person’s financials or if you’re unfamiliar with their belongings and holdings.

Physical abuse includes neglect, restraint, or any action that causes bodily harm, such as hitting, kicking, pinching, biting, hair pulling, and more. This type of abuse is easier to notice than the others, as bruises and other physical marks are more apt to heal more slowly.

As in the example at the beginning of this article, intentional verbal conduct that imposes emotional or mental torment is highly abusive. Intimidation, withholding of medication, isolation without consent, and forms of humiliation are common examples of this type of abuse. Look for signs of depression, sadness, and disassociation.

Deliberate neglect is when a caregiver actively neglects the elderly person’s basic needs, such as food, water, grooming, and medical attention. Passive neglect happens when the caregiver is not knowledgeable or properly trained to provide or ask for medical attention. This type of neglect is more difficult to spot unless the elder is capable enough to identify the problems. 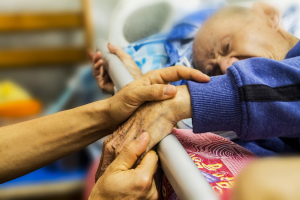 How to Spot Nursing Home Abuse

In many cases, if you are a frequent visitor you will be able to spot some of the more obvious signs. However, if the visits are infrequent then it may not be as possible to detect some of the more subtle signs.

A few clues that may help reveal abuse:

If You Suspect Nursing Home Abuse

Even though Canada has been actively addressing elder abuse since the early 1980s, it continues to be a growing problem. If you suspect a relative or someone you know is experiencing nursing home abuse, understand that it constitutes a personal injury. Although compensation may not correct the past, it may assist in solving the immediate problem and providing the necessary financial assistance to provide comfort and care for the future.

Wynperle Law associates are trusted personal injury lawyers in Hamilton, and we encourage everyone in this position to contact us immediately for a consultation. We don’t take elder abuse lightly and will stand by you in taking this offensive situation to the next step. Call 1-866-696-0300 or fill out this quick contact form to get started. Our consultations are provided at no cost to you. Let us help you protect your loved ones.