Updated Guidelines for the Management of Concussions/mTBI

Concussions, also known as “Mild Traumatic Brain Injury” (mTBI), have received much warranted attention over the past few years, particularly with sports stars like Sidney Crosby demonstrating the seriousness of such injuries. 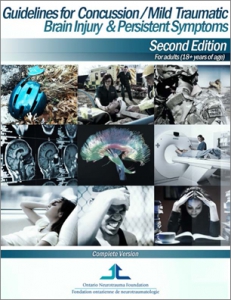 It is now clear that there is nothing “mild” about concussion/mTBI and no two injuries are alike. In March 2011, the Ontario Neurotrauma Foundation (ONF), responded with the development of evidence-based guidelines for the comprehensive management of concussion/mTBI. The guidelines have since become internationally known. Following evaluation by sport medicine and military physicians, ONF released an update of the guidelines (a second Edition) this past September.

The Guidelines are intended to inform and instruct care providers and other stakeholders who deliver services to adults 18 years and older who have sustained or are suspected of having sustained a concussion/mTBI. By applying the guidelines, health care practitioners are now able to provide enhanced care for adults living with the effects of the injury.

Pediatric Guidelines for Concussion/mTBI and Persistent Symptoms, similarly aimed at health care practitioners and other experts to provide care for children and youth, are now in the works (sponsored and developed by ONF). These are expected to be available in Spring 2014.